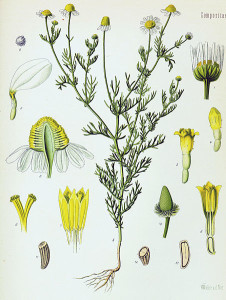 Chamomile tea has been regarded as a medicinal cure-all. Dried chamomile flower is an age-old medicinal drug known in ancient Egypt, Greece and Rome. Chamomile’s popularity grew throughout the Middle Ages, when people turned to it as a remedy for numerous medical complaints including asthma, colic, fevers, inflammations, nausea, nervous complaints, skin diseases and cancer.

Chamomile is anti-inflammatory, anti-bacterial, anti-allergenic and has sedative properties – it is one of the most important herbs. Chamomile is included as a drug in the pharmacopoeia of 26 countries. It may be used internally or externally. Extensive scientific research has confirmed its therapeutic benefits.

In addition to medicinal use, chamomile enjoys wide usage, as a refreshing beverage tea and as an ingredient in numerous cosmetic and external preparations.

More on how to cultivate, references and research…

Chamomile is a MUST for any household!

Our Products made with Chamomile: